Last Train to Stratton: A Prologue 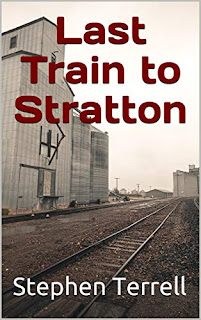 My latest novel, Last Train to Stratton, is now available on Amazon.com in both paperback and ebook versions.
I'm very proud of this book, but it doesn't easily fit into any convenient genre. There's a love story or two, but it's not a romance. There's some humor, but it isn't a humorous book. There's a murder and an investigation, but it isn't really a murder mystery. Maybe one could pigeonhole it as mid-century fiction or "flyover" fiction, if those are even a categories.
Maybe it's best to say it's a book about everyday people facing grief, anger and angst in the challenges of life. I hope readers will enjoy it and find it a book that touches emotions in many ways.
Here is the opening to Last Train to Stratton.

The times when our lives change, when everything before is altered and everything after is different, are seldom recognized as they happen, rarely understood for the ripples that extend beyond the horizon to places we cannot see. Life does not come with highway signposts that warn “Danger Ahead” or “Go Slow,” or perhaps more importantly “Do Not Enter.”
Robert Frost wrote of two roads diverging in a wood, but most watershed junctures are not so obvious, so visible, so tangible. Instead, significance is concealed among daily comings and goings. The import of decisions and events may not appear for years – decades – a lifetime later, when in quiet reflection, we glimpse the ghosts in our memories, discerning faint shadows of people and happenings that, knowingly or unknowingly, shaped not just the path of our lives, but the way we perceive the human experience.
While the tumultuous 1960s shook the foundations of society, I cruised through those years on a steady, seemingly well-planned course. I was a budding star in the newsroom, my career progress measured in headlines and bylines. My personal life flourished in an isolated singularity of booze, cigarettes, baseball and uncommitted sex.
But beginning in the fall of 1972, my life transformed like shifting tectonic plates that cause the ground to fall away and reveal an unfamiliar world around me. Looking back on a brief window between Nixon’s zenith and the Nation’s Bicentennial, I can see those transformative moments stacking up in my life one upon another like so much cordwood. Some jarred me instantly like a stray hand on high voltage. Others were part of the mundane daily routine, their significance overlooked until long after the concrete had set.
Such was the case in June 1975. My life shattered, I sat in a cluttered office in a western suburb of Chicago, interviewing for a new job for the first time in more than a decade. It was a small-town job, and in its dullness I expected to find a numbing balm for the pain that scorched my life.
I was wrong.

Posted by Stephen Terrell at 5:27 PM

Stephen Terrell
Stephen is a lawyer, writer and an avid motorcyclist.

1. Catch 22 by Joseph Heller
2. Rising Tide: The Great Mississippi River Flood and How It Changed America by John Berry
3. To Kill a Mockingbird by Harper Lee
4. Snow Falling on Cedars by David Guterson
5. In the Garden of Good and Evil by John Berendt
6. In the Garden of the Beast by Erik Larson
7. American Prometheus: The Triumph and Tragedy of J. Robert Oppenheimer by Kai Bird and Martin J. Sherwin
8. Ordinary Grace by William Kent Krueger
9. In the Electric Mist With the Confederate Dead by James Lee Burke
10. Redeployment by Phil Klay