In 2012, as James Bond celebrated his 50th Anniversary of the first Bond movie, I put together my ranking of all 22 films. Since then, three more Bond films have been released, including the recent No Time to Die, the 25th Bond film and Daniel Craig’s final appearance as Ian Fleming’s iconic 007

This caused me to look back at nearly 60 years of going to James Bond movies. Here is how I rate them.

1.  Goldfinger. (1964) The third installment in the Bond series is the first Bond movie I saw, and it got everything right. It opens with the best of all the Bond theme songs belted out by Shirley Bassey over the best opening title sequence. The girls, the gadgets, the settings, the music, the one-liners, Pussy Galore, Odd Job, Goldfinger, and the plot to knock off Fort Knox.  What more could you want? 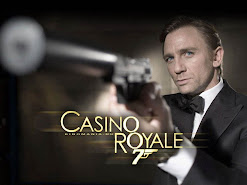 2.  Casino Royale.  (2006) Daniel Craig's reboot of the series is spectacular. Bond is restored to his ruthless nature as a 00 agent.  Eve Green gives perhaps the best performance of any Bond female as Vesper Lynd -- "the money." Her character casts a shadow through all of the Daniel Craig movies, including No Time to Die. The gadgets are minimal, the characters believable, and the realistic plot is drawn directly from Ian Fleming's first Bond novel.

3.  From Russia With Love. (1963) Bond really hits his stride in this second movie in the series, and Sean Connery is at his best.  All the components are there, and the plot is full of intrigue, twists and turns, but the storyline stays within reality.

4.  No Time to Die (2021).  If he had not done so already, this fifth and final Daniel Craig Bond film puts him firmly alongside Sean Connery as defining the character. The longest of all the Bond films at 2 hours 40 minutes, it fills that time with unrelenting action and a Bond who feels the burden of his own choices in life. He is a more fully developed, multi-dimensional character -- a man in full -- which makes his final acts in the movie all the more heroic.

5.  Skyfall (2012).  In many ways, this movie is as much about M as it is about Bond in Judy Dench’s farewell appearance as the head of British Secret Service. A former 00 agent has gone rogue, seeking his revenge on M and MI6. Ultimately, the story goes back in Bond’s past, heading back to Bond’s ancestral home in Scotland for its climax. 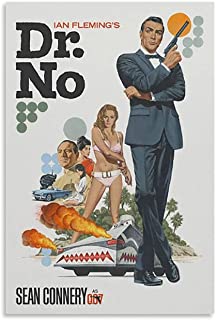 6.  Dr. No   (1962).  Many Bond fans underrate this movie. It established so many of the things that made Bond a success, from Bond’s very first words (“Bond. James Bond”). Exotic settings, a mysterious villain, fascinating characters ranging from the "three blind mice" to M and Moneypenney, and of course Honey Ryder (Ursela Andress).  But mostly, the movie established Bond as something different, a 00 agent who would make love to a beautiful enemy agent or shoot a man with an empty gun, whatever was required. Without the foundation of this movie, I doubt we would have seen the 24 that have followed.

7.  Thunderball (1965)  The last of the really good Sean Connery Bond pics.  The opening sequence is powerful. Adolfo Celli's Emilio Largo is the best bad guy with a patch since Long John Silver.  Add in a beautiful red-haired assassin, hungry sharks, and extensive underwater battle scenes, and you have a winner.  The only shortcoming was that the intricacies of the plot were at times hard to follow. You may need to watch the movie multiple times before you understand the relationship between the events at Shrublands and the rest of the plot.

8.  Goldeneye (1995)  The first Pierce Brosnan movie was his best.  Excellent from the opening dive off a dam, to the orgasmic killer, to Bond facing a friend and former 00 agent who was now a traitor.

9. License to Kill (1989). Perhaps the darkest of all the Bond movies was Timothy's Dalton's best. When Bond's best friend's wife is murdered, he sets out on a personal vendetta. Though he drew criticism from many fans, I thought Dalton was an excellent Bond..

10.  Live and Let Die  (1973)  Roger Moore's initial effort was kicked off with a great theme song by Paul McCartney, great locations (New Orleans, New York & Haiti), a great boat chase, quirky villains, and Jayne Seymour as Solitaire. It signaled a "lighter" version of James Bond. Success was in the cards.

11.  SPECTRE (2015) The Daniel Craig Bond films were not filled with Spectre as the evil organization behind things – that is, until the movie Spectre when it is revealed that all the plots of the prior Craig films were organized and manipulated by Ernst Stavro Blofeld and the international crime organization Spectre. Personally, I didn’t care for this twist. Nevertheless, Christoph Waltz was by far the best actor to play Blofeld. The story of Spectre sets the stage for No Time to Die.

12.  For Your Eyes Only (1981)  In this movie, the series moved away from outlandish over-the-top nature of Moonraker and focused on a more believable plot -- recovering an ATEC devise that can signal missiles on nuclear submarines.  Chaim Topol (yes, the same guy who sang and danced to a Best Actor Oscar for Fiddler on the Roof) is wonderful as Greek smuggler Milos Columbo.  The scene where Bond, Columbo and Columbo's gang scales a steep cliff is one of the best of the Roger Moore era.  The movie ends as Bond throws the ATEC over a cliff to keep it from the hands of the Russians.  "Detente, comrade. You don't have it; I don't have it."

13.  The Living Daylights  (1987) Timothy Dalton's first film as Bond was a throwback with less gadgets and more plot.  While some balked at Dalton's colder 007, I thought his portrayal was a throwback James Bond as Ian Fleming created him.

15.  You Only Live Twice  (1967)  Bond finally comes face to face with his nemesis Ernst Stavro Blofeld. The Japanese location was great, as was the air battle with Little Nelly.  But even with Sean Connery in place, Blofeld's casting and makeup was a big miss, and the plot about kidnapping spaceships and returning them to a secret lair inside a volcano was just too far out to place it among the better bond movies.

16.  On Her Majesty's Secret Service (1969).  George Lazenby had the unenviable job of following Sean Connery as James Bond - sort of like following John Wooden as coach at UCLA.  Connery so defined the role that any actor would likely have fallen short.  This movie drops the gadgets that had taken over the series and moved toward the novels and the early movies. There were two really big problems. One was the casting of an Australian male model to play Bond. It just didn’t work. The other was the producers skimping on production.  The action scenes -- an avalanche, a ski chase, and the final bobsled chase - all seemed cheaply done, particularly when compared to Thunderball, Goldfinger and You Only Live Twice.

17.  Tomorrow Never Dies (1997).  A megalomaniac media mogul tries to use a secret stolen encoder to start a world war in order to increase circulation.  It's an entertaining romp with Pierce Brosnan in his second Bond film. In light of Rupert Murdock and Fox News, the plot seems not so far-fetched.  Life, imitating art, imitating life.

18.  The World Is Not Enough (1999)  Electra King knocks off her dad, plots to explode a nuclear bomb and kidnaps M -- not bad for the only female leading villain in any Bond movie.

19.  Diamonds Are Forever  (1971).  There are some great elements in Diamonds Are Forever.  Sean Connery is back.  Shirley Bassey belts out a great theme song. Jill St. John as Tiffany Case.  Mr. Kidd and Mr. Wendt are wonderfully unusual assassins.  The Amsterdam elevator fight is one of the best in all the Bond movies. The primary setting is in Las Vegas. It all should work.  But why didn't it?  First was the repeated "attacking the world from space plot," complete with hokey laser effects.  It didn't work the first time in You Only Live Twice. Unfortunately, this plot element did live twice.  Second, there was casting Jimmy Dean as the Howard Hughes-like tycoon Willard White.  Really?  Jimmy Dean? Sausage king maybe, but not Howard Hughes.  Finally, there was the casting of Charles Gray as Blofeld. Gray was better cast as the narrator in Rocky Horror Picture Show.

20.   A Quantum of Solace  (2010)  Following Casino Royale, this was a big disappointment.  The plot was convoluted and just didn't keep your interest. Still, like Connery, Daniel Craig is great as Bond even when the movie isn't.

21.  The Man With The Golden Gun  (1974).  This second Roger Moore offering has its moments. Scaramanga with his memorable third nipple (from the novel) was a fitting adversary for Bond.  But the whole shooting gallery thing and that weird little Nick Nack made it seem like an episode of Fantasy Island. It was just a little too strange for me.

22.  Die Another Day (2002) Pierce Brosnan's fourth (and last) Bond movie had lots of potential.  It starts with Bond being captured and tortured by North Korea when a mission goes awry.  Add Halle Barry as Jynx, a CIA agent, and a couple of homages - one to Ursula Andress's bikini in Dr. No and a quick glimpse of Birds of the West Indies, by orninthologist James Bond - the book from where Ian Fleming borrowed the name James Bond.  But when this movie dissolves into an ice palace and invisible cars, it throws away all those great things in the first half of the movie.  Such a waste of potential.

23.  Octopussy (1983)   This is another movie that had potential but seem to fritter it away.  Maud Adams was outstanding. She was a near-equal of Bond, a smuggler with her private army of beautiful women.  But any movie that ends up with suave dangerous James Bond in a clown outfit with a red nose and big feet . . .   Lets just say this - we would never see Sean Connery or Daniel Craig with a red nose.

24.   View To A Kill (1985)  Roger Moore's silicon valley swansong was just awful.  Nothing symbolized how bad the movie was than the initial car chase where Bond ends up driving half a subcompact - a far cry from an Aston Martin DB5. The movie was noteworthy as the final appearance of both Moore as Bond and Lois Maxwell as Moneypenny.  Candidly, both had gotten a little long in the tooth for their roles. Despite the awful plot, the movie did feature a wonderfully demented performance by Christopher Walken as Zorin and a powerful performance by Grace Jones as May Day.

25.  Moonraker  (1979)  Bond in space. Ray guns. Fighting in weightlessness. And Jaws as a sympathetic, misunderstood, indeed even romantic bad guy with a heart of gold.  Whoever wrote this disaster should have never been allowed near another script.  Only saving grace - an underrated theme song from Shirley Bassey - her third and final Bond theme.

*NOTE:  This list includes Eon Productions only. It does not include 1967 Bond spoof Casino Royale or 1983 Never Say Never Again, a non-Eon Productions remake of Thunderball.

Stephen Terrell
Stephen is a lawyer, writer and an avid motorcyclist.

1. Catch 22 by Joseph Heller
2. Rising Tide: The Great Mississippi River Flood and How It Changed America by John Berry
3. To Kill a Mockingbird by Harper Lee
4. Snow Falling on Cedars by David Guterson
5. In the Garden of Good and Evil by John Berendt
6. In the Garden of the Beast by Erik Larson
7. American Prometheus: The Triumph and Tragedy of J. Robert Oppenheimer by Kai Bird and Martin J. Sherwin
8. Ordinary Grace by William Kent Krueger
9. In the Electric Mist With the Confederate Dead by James Lee Burke
10. Redeployment by Phil Klay